What Creativity Really Is? 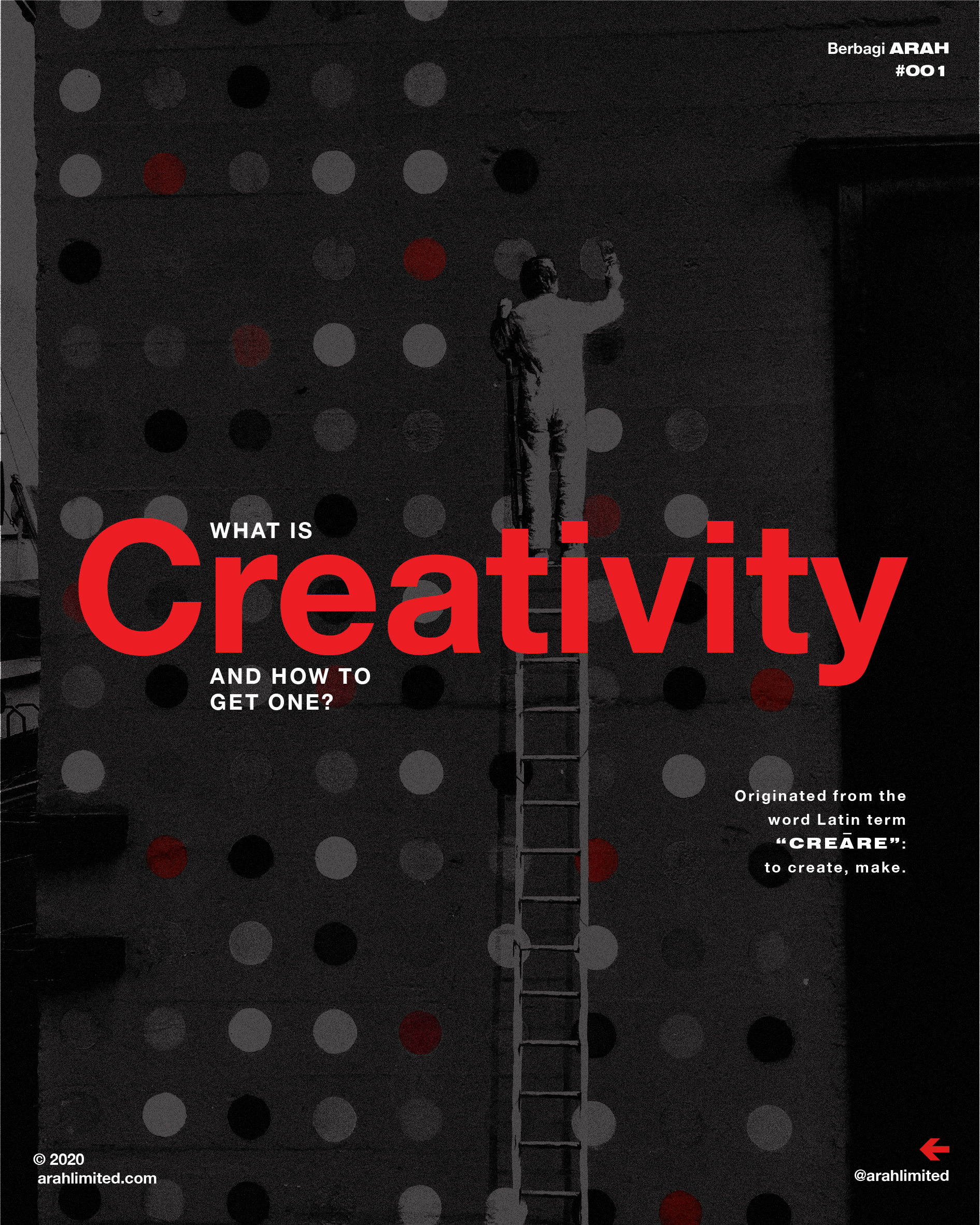 The industry nowadays is loaded with talents and people might have wondered and always been looking for ways to redefine what is the meaning of “creativity".
Isn’t that actually a simple thing? Does “creativity” mean ‘creative people do creative things’?! If not, what the hell is it actually?

Creatives are designers, that’s what we all thought all along, isn’t it? Not really.

In the digital space, we often tie “creativity” directly with pretty pictures, graphics and color. So it’s easy to think that designers, photographers, artists or painters are creative people. But in fact, every field of work can incorporate their creative thinking into day-to-day activity so everyone can be creative.Bei

What is being creative?

Creative is about solving problems in a new way and changing the perspective. If you have ideas but don’t act on them, you are imaginative but not creative.

Being creative includes the ability to perceive the world in new ways, to find hidden patterns, to make connections between seemingly unrelated phenomena, and to generate solutions are the characteristics of being a creative individual. And so creativity involves two processes; thinking and producing.

1. Being creative is able to tell a new story

Jukkasjarvi, a small cold city in Sweden, 200km above the polar circle barely had any tourists ever considered to travel. Until an entrepreneur, Ynve Bergqvist invented The Ice Hotel in 1990. After the opening, tourists all over the world come to see the small cold city.

The Ice Hotel has gained plenty of attention since its opening. It's one of the few hotels that is exactly what its name entails. With rooms made out of frozen water, some might not be into the idea of spending a frigid night here—but the atmosphere is far cozier than many realize. It’s an eye opening for the world that Sweden is absolutely beautiful and worth a visit. And since then, every year 20.000 tourists come to visit Jukkasjarvi.

In 1990, Paul Cowan, a Saatchi & Saatchi (multinational communications and advertising agency) junior executive decided that his new struggling firm, Saatchi & Saatchi should be the first to advertise over the wall. With the little money they saved up, they made a risky decision to put their advertisement on the wall.

The point of the advertisement was for those to associate this new advertising agency with individualism and freedom of consumption. That the agency and the products it advertises, are as brave and courageous, as those who have endured the war. An ad that had those who read it, relate to it almost instantaneously.

This big ambitious statement sparked the beginning of Saatchi & Saatchi’s immortality. It is now one of the biggest advertising agencies in the world.

There’s a strong connection between creativity, risk taking, doubts and fears of failing. In fact, the thing about creativity is that it requires all of the three above.

Because creativity is about doing something where you don’t know the outcome, that means it’s about taking a risk. It also means that being creative can have significant gains and there can be significant losses as well. In essence, you cannot be creative while remaining completely safe.

Doubts, whether doubts that come from others and even yourself, can crush confidence. A lot of creative people gave up because they were way too doubtful of themselves. With doubts, people could give up on projects that seemed challenging because they weren't confident in their ability to master a skill.

Always remember that being afraid of taking risks, indulging doubts and afraid of facing fears are distrust your own values of creativity!

Before 1985, ski jumpers around the world jumped with their skis parallel. Until Jan Boklöv from Sweden began jumping with spread skis. This position is achieved by pointing the tips of the skis outward in opposite directions to create a V shape.

After initially being ridiculed for his nontraditional style, Boklöv was later the model for World Cup ski jumpers after his first-place win in the 1988–89 World Cup competition and scientific tests that proved the superior lift gained from the V style.

2. Be intuitive, follow your guts and explore creativity freely

Malcolm McLaren, a performer, musician, clothes designer and boutique owner, notable for combining these activities in an inventive and provocative way.

He attended a number of British art colleges and adopted the stance of the social rebel in the style where in 1970s he largely initiated the punk movement in New York and open a clothing shop named SEX. The clothing style made a huge fuss and was very controversial at that time. Their tee is full of radical reworking of bondage gear, subversive slogans and nude photos. His shop then became a laboratory for McLaren’s provocations and the launchpad band, the Sex Pistols.

Creativity is a subtraction

Creative ideas require a reference frame to be understood. If your idea is to take a shape and transform it into something new, using an unidentifiable blob is no help at all. Instead, use an instantly recognisable form, so that the changes you make can be perceived as having originated somewhere.

This principle holds true for all creative works and basically every creative subject that we see daily in day-to-day life. Subtracting the peripheral ideas that confuse or compromise your creativity will make your idea more vigorous as you are trying so hard to win awards and are desperate for attention.

In this age of abundance, less is certainly more. If you can figure out what to leave out, like stop hoping for noise of attention by all means, you will be the one to get ahead. Because you will be concentrating on what’s important to you; your arts, your creative work and your people—so therefore, creativity is indeed a subtraction.

Do Work That Matters

Focusing on WANTS vs NEEDS